Dubrovnik – most famous city in Croatia

Dubrovnik – most famous city in Croatia

Today we will have a blog about the most famous city in Croatia, and overall in this region. Even though you have heard something about it, we will try to give you more informations. Dubrovnik is a historical city, at least 13 centuries old. It is famous for its city walls and whole antique architecture that surrounds you while walking through the city. Walls were built during 12. and 13. century as a defense system. It was necessary because Dubrovnik was getting stronger and slowly becoming strong merchant force. Most of the time, the walls were not necessary since Dubrovnik had many diplomatic arrangements with neighborhood countries like Bosnia and Italy.

The city was throughout the history independent state called “Dubrovačka Republika”. Only connection with Croatia was its vicinity and a small fee that Dubrovnik needed to pay Croatia so it could stay independent. Only with the influence of Napoleon Bonaparte, at the beginning of 19. century, “Dubrovačka Republika” ceased to exist. After Napoleon lost his power, Dubrovnik tried to restore its independence, but it was too late. Dubrovnik became a part of Dalmatia, just as it is now. Since Dubrovnik was a strong diplomatic force, the city did not have big problems or damage from the wars, which was typical for most of the countries in the history. Biggest accident for Dubrovnik was earthquake in 1667., when it demolished most of the city and killed almost half of the inhabitants. Soon after that, there was also a big fire. This could have destroyed “Dubrovačka Republika”, but they prevailed and restore its full power. Before we take you to present, i will give you a funny fact. Until the end of 19. century, Dubrovnik was a very dark city. They did not have electricity until 1901., so it was very dark on the streets. Whole city had only 45 candles on the streets. They lasted only for few hours, after that there was only dark until the morning. In close history it needs to be mentioned that Dubrovnik was a big victim of homeland war that occurred in the 90s . Many of historical building were destroyed during the war, but thankfully the city is now completely renovated and the scars of the war cannot be seen nowadays.

Dubrovnik now has around 45,000 inhabitants, but those numbers rose drastically up when the summer season begins. Since the city is so interesting, the season lasts almost whole year. I am not going to write you about the climate and things to see in this blog. Those are informations that you can easily find on the internet.

At the end of this blog, i can say that Dubrovnik was the source of many famous Croatians, that changed the history of the whole country. Maybe these names would not mean much to you, but they are very important: Marin Držić, Đuro Držić, Ivan Gundulić, Luko Paljetak and many other famous poets. Dubrovnik is now famous for one of the biggest water polo club in the world, Jug Dubrovnik.

I could write so many other informations about the city, but this is enough for the beginning. Stay tuned for more blogs about beautiful Croatian coast with special focus on the most important locations in Dalmatia like Split, Hvar, Brač, Zadar, Šibenik, Dubrovnik and many others. 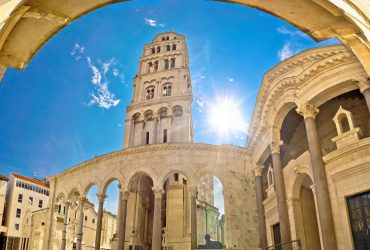