When we talk about tourism in Brela, and its beginnings, it is necessary to mention bishop Nikola Bijankovic. He built a church „Gospe od Karmela“ in part of Brela called „Soline“. As a sign of gratitude to Nikola, you can find a pine planted in front Hotel Soline, in the center of Brela. 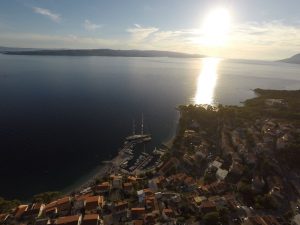 First organized attempt of tourism was in 1932., when first pension was opened under name „Soline“, by brothers Filipović. Since there was no way for guests to eat elsewhere, in the beginning pensions had fullboard. Few days before World War II., Beroš brothers built first restaurant called „Palma“, and it is still working. Interesting fact is that there was no electricity, water or sewerage. Road to the sea was terrible.
War stopped development in Brela, but after tourism started to grow rapidly. Soon after the War, Brela got electricity, water and sewerage. Road to Brela was better. Harbour offered to the people possibilty to keep their boats safe and protected. Even though most of the people were fishermans and lived out of fish, tourism expanded rapidly. New apartments in Brela were built very fast. Capacity of Brela accommodation was expanded to a level that in these years there can be 10 times more tourists than locals. This is nowdays possible since Brela totally subordinated itself to the guests and their desires. Brela apartments have top quality and offer to the guests luxury for a dream vacation. But not only accommodation in Brela is top quality. Natural enviroment is well taken care of. Brela arrangment is becoming better and better from year to year.
Also, kind people of Brela are trying to please their guests with a lot of services so nothing would miss them. Lot of restaurants, shops, fruit markets is something neccesary to have in one tourist place. Also, very important is to have good connection with surrounding places. If you want to go on many of the islands close to Brela, you have ferry or boats that arrange excursions to the islands. Excursions from Brela are one of the possibilities how to visit places you need to see such as Split or Dubrovnik. If you want to go by yourself somewhere, than you can arrange taxi from Brela.
All of this will make your holiday home in Brela a dream come true. Just try and you’ll see!